Notes on walking in the Drakensberg 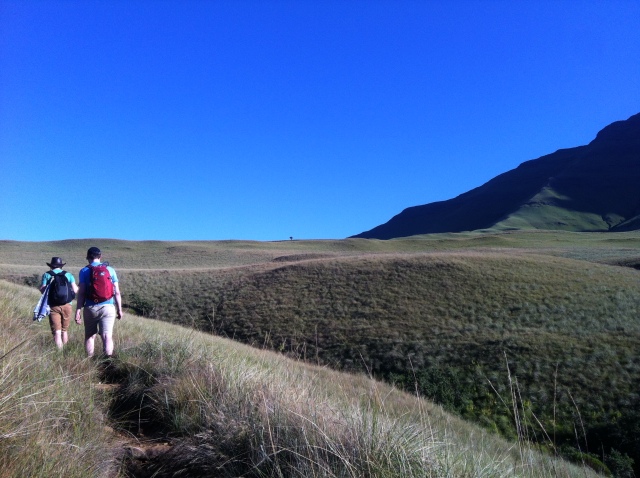 Two weeks ago I wrote about a series of three day-trips I did in the uKhahlamba-Drakensberg National Park in South Africa. I thought there were a few general points worth mentioning in addition to the trip reports. In hindsight we could have gotten even more out of the five days we spent in the area, had I known a few more things about the Drakensberg and planned with them in mind.

What makes the Drakensberg special

The Drakensberg has the usual charm of mountains: great views, calm and quiet, a distance from dense urban population. However, all of these seem to be more intense and there is more.

The shape of the Drakensberg with its clearly defined escarpment of steep-sided blocks and pinnacles is unique. It gives rise to amazing views from abrupt cliff edges and creates countless waterfalls. Additionally, there is significantly less walking traffic in the National Park even at low altitudes compared to what you can expect in Europe. You can actually swim in a waterfall undisturbed by anyone else. 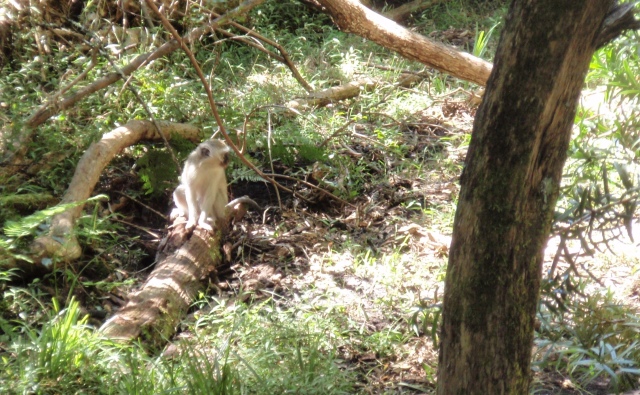 A vervet monkey in Monk’s Cowl

This greater remoteness also shows in the wildlife, which is unexpected for a European. We saw several kinds of antelope, eland, baboons, vervet monkeys and leopard prints during our three day-trips in the park. Finally, the lowest sandstone layer of the Drakensberg is dotted with caves, many of which have been decorated with rock art paintings by the San people thousands of years ago.

Both its natural beauty and cultural heritage have put the Drakensberg on the UNESCO World Heritage list.

The importance and difficulty of planning 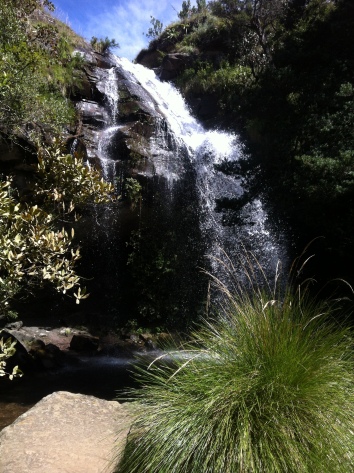 I am used to walking in Europe, either in the Alps or in England and Wales and I had never been to Africa before this trip. Really, I should have spent more time planning the trip than I would usually do. Unfortunately I did the opposite, because I didn’t have enough time.

Consequently, I have a small regret in never reaching a summit or at least getting high up the escarpment, which with a little bit more planning would have been absolutely possible. Thankfully, the Drakensberg is great even at lower altitudes. Our hike in Cathedral Peak was an amazing mix of waterfall swimming, adoring lianas in a rainforest and wildlife spotting.

Back to the challenges of planning a trip in the Drakensberg though. There are a few.

Picking a reserve to walk in

There are eleven different reserves within the Drakensberg National Park, each more or less around a central trail-head opening up a number of walking possibilities in each reserve. With no time for detailed research, I decided to answer the question by avoiding it and opted for a series of day walks in different reserves. I stayed at Inkosana Lodge in Champagne Valley and walked in Monk’s Cowl, Cathedral Peak and Injisuthi. If I had to settle for one of the three now, I’d go with Cathedral Peak. The area is stunning and there’s enough walking for 5 days.

The distance between various reserves is considerable and the roads can be bad. This is something to bear in mind when selecting your ‘base camp’, if you’re planning to walk in more than one reserve. I underestimated the distance between Monk’s Cowl, Cathedral Peak and Injisuthi and travel time ended up eating into our walking time. 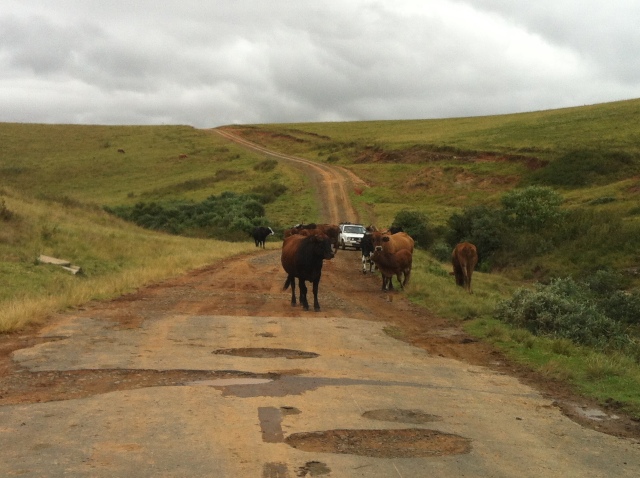 The drive to Injisuthi takes longer than you might expect

The eleven park reserves have strict opening and closing times. If you’re on a day trip, not being out on time means a fine and very possibly also a car locked inside the reserve not served by any public transport. In Monk’s Cowl we had to dash pretty quickly to get back to the gate for 6pm.

There are hardly any mountain huts in the Drakensberg. Hence, any multi-day trip requires camping. Although this can in turn be made easier by overnighting in a cave, it also makes summit trips difficult. These are often long (around 10 hours of walking), but breaking them up into two days requires additional gear. I am a fan of ‘do it yourself’ tours, but I’d get a guide for a multi-day trip in the Drakensberg.

The weather in the Drakensberg can change very quickly. I didn’t quite experience the speed of the change, but I got a taste of how strong the sun can be on our first trip. If it is sunny, it is worth picking a route with more shade or starting early in the morning. On the plus side, you can drink water from streams.

Planning around all of this isn’t made easier by the lack of books on walking in the Drakensberg that are available in Europe. I was only able to get hold of Walking in the Drakensberg by Jeff Williams. The book was useful, but I would have appreciated more practical tips and better timings detail – particularly for the long summit walks. I did find a number of websites and blogs with further information though. Shame I didn’t have enough time to properly read through them. 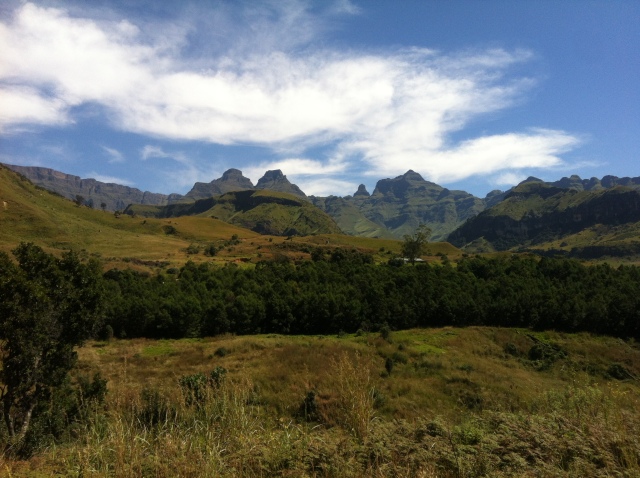 Cathedral Peak on your right